Hearts Unbroken is a young adult chapter book written by New York Times best-selling author and former KU Jayhawk, Cynthia Leitich Smith.  Universal themes of caring about others resonates through each page.
Lou's entering her senior year at a Kansas City high school and she's just broken up with her popular, jock boyfriend who made fun of her Creek heritage.  Lou's dedicating her time to focusing on school and her family, especially since her younger brother, Hughie, is a freshman and he makes it into the musical production of the Wizard of Oz to the dismay of many in the community who want to see white students cast in the big roles.  The town becomes divided on if it makes a difference as to who plays the characters and if those casting decisions affect the purity of Baum's story.  Hughie even gets threats in the mail that scare Lou.  Although Lou was definitely not on the lookout for romance, she is swept up in the arrival of Joey, the new Lebanese-American student who is working with her on the school newspaper.  Will she be able to follow her heart and make better choices that will strengthen her identity?
What stood out to me about this story was the network of community support that Lou has throughout her ups and downs.  Lou asks her father, how do you tell someone you care about them with the fear of rejection at hand?  He says,
"What I wouldn't give for this to be the worst problem you'll ever have.  But, pumpkin, caring about somebody isn't trivial.  It can keep you going."
Readers can discuss times that they've had people express their care towards them and who they care about the most in the world.
Another part of the story that I appreciated was the role of the librarian in the story!  It showed how librarians are trained to connect the right person with the right book.  For example, the librarian buys a book for Hughie, If I Ever Get Out of Here by Eric Gansworth of the Onondaga Nation.  Readers can ask their librarians for topics that interest them and have a conversation about books and authors that they may try out.

The overarching theme is how racism seeps into the daily lives of minorities.  Lou talks with her classmates whose parents are leading the charge against people of color holding main character roles in the musical and the classmates confess that they hear racist conversations in their households.  They thought that Lou would assume that they shared these racist ideas as their families did, but Lou tells her friend, "You're not your parents."  This is a powerful moment where readers can decide what to do and say when they realize that their families have racist or prejudiced opinions about others.
Readers can find real life examples of when traditional White roles have been cast to people of color.  In the story, the role of Dorothy goes to Chelsea, a Black student who is a talented performer.  This is similar to when the live action movie of The Little Mermaid cast Halle Bailey in the role of Ariel and there was pushback from some Disney "purists" who believed this was not a good choice. Readers can share their opinions about where they stand on this issue.

Smith also touches on the racist background of the Wizard of Oz writer, Frank Baum.  Hughie discovers this while researching his role and finds editorials from a South Dakota newspaper that Baum wrote advocating for the genocide of Native Americans.  What's impressive is that Smith doesn't just write about them in passing, but has the actual primary sources from the newspaper printed in the chapter.  Readers can discuss what options people have when learning about the true nature of creators from the past.  I don't want to spoil the story so I won't mention what Hughie does here, but readers can share if they agree with Hughie's decision or not.
Lou also faces conversations about race and prejudice with Joey since he is Lebanese.  Readers can think about the stereotypes associated with people from the Middle East and how they can go about talking about those with others.  I'm impressed by Smith as she weaves all of these important topics into an entertaining, heartwarming story about a Creek young woman coming into her own. Lou's not perfect and that is something to which everyone can relate!
Smith's website has a treasure trove of resources for book clubs and more. I hope young adults and adults read and discuss this award-winning book.
at August 28, 2021

There are some authors whose books I will read no matter what.  Now imagine my delight when six of these writers collaborated on one book!  ... 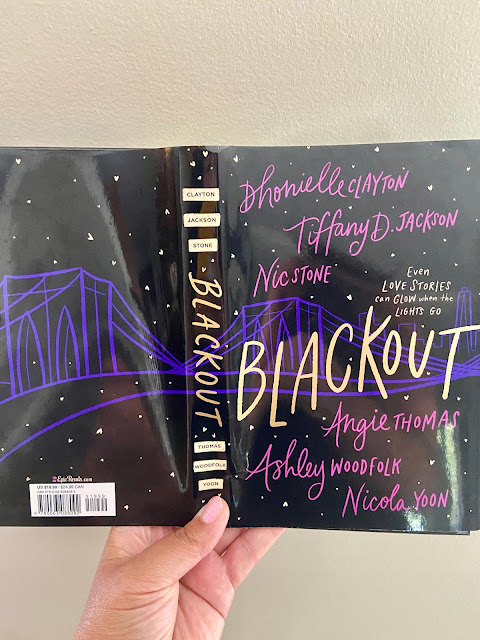